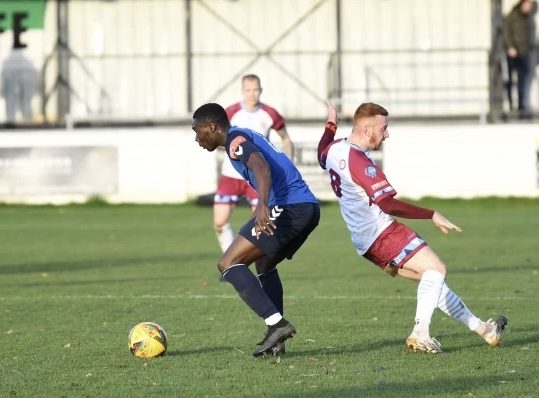 Dami’s development when on our Kinetic Academy programme was nothing short of astounding. I can count on one hand the players that have developed to the magnitude Dami has, another player in his cohort at Woodcote High School, Ethon Archer, would be right up there with him as well.

Dami would admit himself that when he joined the Kinetic Academy programme he was nowhere near the most talented players but he possessed outstanding physical attributes. Initially Dami played right wing and needed space to be able to be effective but once he could isolate opponents, he was very hard to stop due to his impressive pace and power. However when players enter senior football, it is often early physical developers such as Dami, who need to adapt their game to continue to be successful. Players that have over relied on physical attributes thus masking technical deficiencies, often become ineffective during the step up to senior football.

As with a lot of players who come onto our Kinetic Academy programme, Dami started as an attacking player who gradually worked his way back into defence. Another example is Kamal Grant, a recent graduate who was a centre forward before converting to a centre back and signing a professional contract with Sheffield United. Dami moved from a right winger to a right back and started to develop defensive instincts, positioning and understanding.

Throughout his 1st year Dami made gradual but important progressions in his game. He always had the ability to head the ball, a skill often lacking in modern football. We often referred to this as ‘heading the ball like a man’ – a nod (excuse the pun) to the lost art of heading the ball, I suppose. Kinetic teams often dominate the ball at our level and our centre backs can be left isolated in counter attacks often in 1v1 situations. This, coupled with the need for players to dominate aerial situations due to the typical tactics we face from our opponents in non-league, meant Dami started to be nudged to the centre of our defence. This marked another crucial stage of Dami’s development.

I just want to pause at this stage and explain a bit more about Dami’s personality. He has always been a dedicated, patient, and humble young man. His maturity and emotional control have, in my opinion, allowed him to focus on making realistic and gradual improvements in his game. “Trust in the process” is a much coined phrase among our staff, however I am fully aware that this is easier said than done. Players come into Kinetic Academy and think we are a magical pathway to being signed to a professional club in a matter of weeks; the reality is very different. We work hard to develop, enhance, and relate a player’s raw abilities into a ‘product’ that a professional club can see playing for their 1st team in the next year or so. Thankfully, we have become pretty good at this.

Dami’s raw physical attributes were never in question but his ability to stay focused and ‘trust in the process’ has allowed him to reach the next level. Young people often think their time is running out and they become disillusioned with their football opportunities, this impacts their motivation, and a lot of players get lost to the game.

In contrast, Dami’s head-strong determination has never wavered and, in turn, neither has his ability to keep improving.

Dami cemented his place in our best group as a left centre back midway through his second season with us and was instrumental in our successful US tour – please see clips below:

Dami then spent time at Croydon FC and Whyteleafe FC for the next season and a half, staying patient, working diligently and quietly developing his game. This season (2020/21) Dami started 11 out of 11 games for Whyteleafe FC and was attracting attention from several football league clubs, and rightly so following the level of performance he was producing week in, week out.

At the start of his journey Dami wouldn’t have even been in the top 20 players in our Academy but fast forward a few years and he has surpassed nearly all of them. It would not surprise me to see Dami continue his development with Iowa Lakes and I am honestly excited to see where this may take him. Dami will surely reach his ceiling at some point? Well, hopefully not anytime soon. If you trust the process and put yourself in the right environment it is amazing what can be achieved.

“I want to play Professional football and hopefully will get the chance by going to America.”