"I'd never been abroad before going on tour with Kinetic. They have given me so many opportunities beyond just playing football and I definitely want to stay involved with them for as long as I can." - David, part-time Academy player 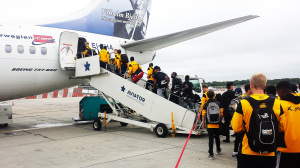 Part-time academy players are guaranteed to take part in the Gothia Cup in Sweden. We play  professional and semi professional sides in a knock-out tournament with a minimum of five matches across the week.

Referred to as the Youth World Cup, the week-long tournament is fully funded as part of the programme.

Attended by over 1600 teams from over 80 different countries, this opportunity is one which the players will never forget.