We love to hear news of how our graduates are doing and no one could be prouder than we are at Kinetic right now as our very own, Rhys Norrington-Davies, moves from Sheffield United to Rochdale AFC on a season-long loan.

Just 20 years old, Rhys is already a highly rated left back and according to reports this position has been a priority for Rochdale this summer. Drawing from a Rochdale Club report Manager Brian Barry-Murphy said: “The left-back position has been a priority this summer. We felt that while we develop our own younger left-backs within the club, it was imperative that we had a player who is capable of coming in and making us a stronger team. We feel as though Rhys is that player.”

Commenting on Rhys, Barry-Murphy had this to say: “Rhys is a player that we know very well and that we’ve monitored for a period of time. He is a very energetic and vibrant player. He’s got an appetite for the game and he attacks and defends in equal level of intensity and focus. He brings something different to the squad and complements the other members of our squad.”

We caught up with Rhys, who was, without doubt, delighted with the transfer and looking forward to the coming season with Rochdale. Rhys had this to say: “This is a great move for me.  It’s a step up from last season but one that I feel I’m ready to make and I’m excited to see what the season brings. ” 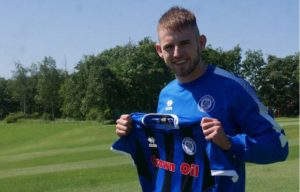 Rhys went on to say: “On a personal note I’m looking forward to competing week in week out at a great club like Rochdale in such a demanding league, which is a very competitive and I can’t wait to play against the likes of Sunderland and Portsmouth.  I couldn’t have asked for a better group of plays and staff to work with.  I believe anything is achievable if you have the right mindset so hopefully we can achieve something special here.”