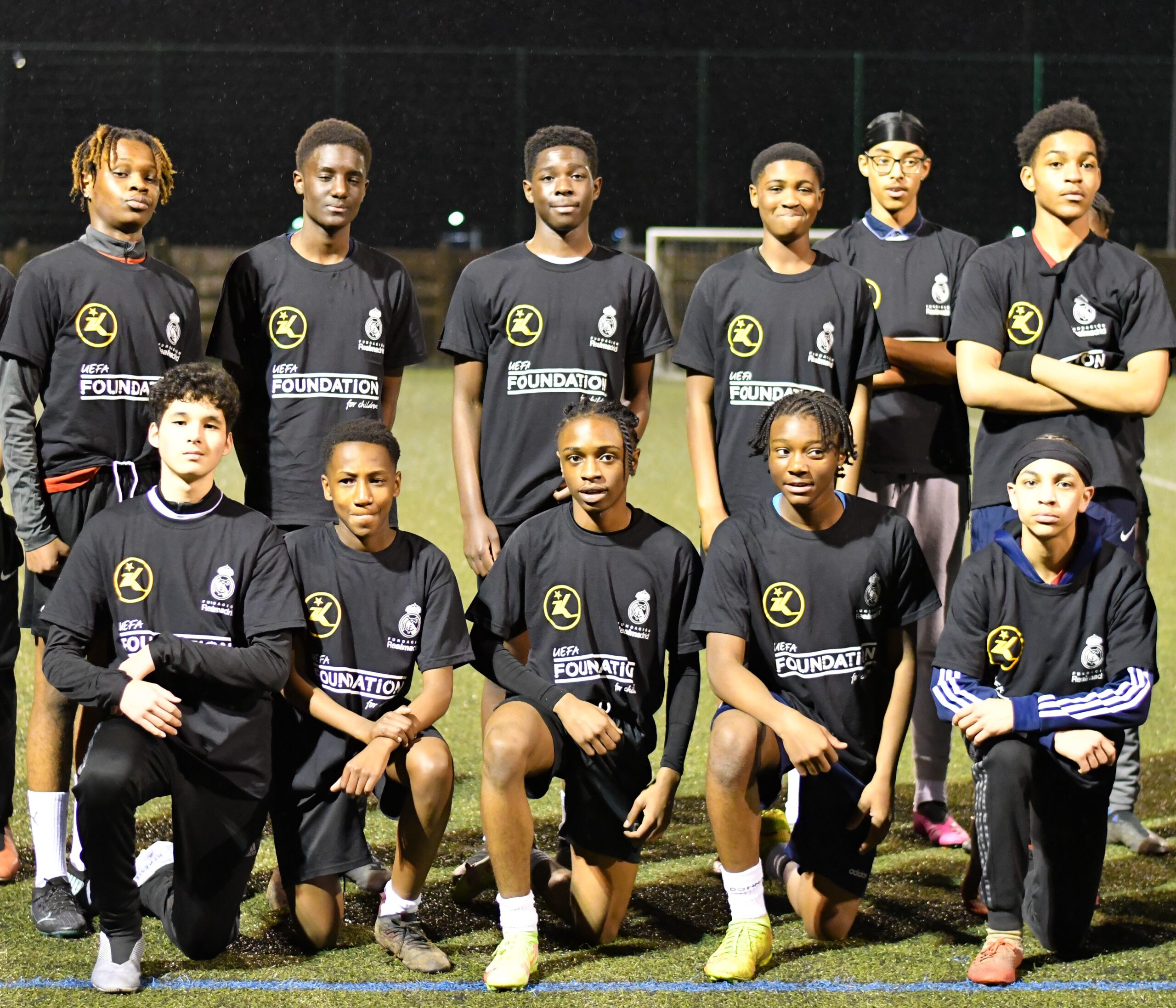 Thanks to the partnership established with Real Madrid Foundation in 2019 for promoting sports and education activities in London, we are pleased to announce that our UK social sports school has received funds from the UEFA Foundation for children that will help improve the lives of young Londoners enrolled in the 2021/22 season and beyond.

Kinetic Foundation co-founder, James Fotheringham: “It is a great privilege to partner and be trusted to deliver successful projects by two household international brands. The social sports school is for 15 to 17 years old that are in a difficult socio-economic situation with the objective to promote positive values and healthy habits through football. The projects will run for 15–17-year-olds, provide kit for the participants and hopefully accelerate their development and life prospects before they move into sixth form, further education or future employment. We aim to engage a further 80 young people this season, providing education advice, workshops and career guidance alongside weekly football training in Croydon”.

The UEFA Foundation for children commits to reach out to those most in need by turning the fundamental values – such as human dignity, solidarity and hope – into opportunities for children to improve their lives. UEFA president Aleksander Čeferin chairs the board of trustees of the UEFA Foundation for Children and hails the work undertaken since 2015, and how football is proving to be a major force for social good. “Having had the opportunity to be personally involved in various projects, I have seen that football is an extremely powerful tool,” said the UEFA president. “Whether it is in refugee camps across the world, the troubled suburbs of European cities or forgotten conflict zones, all the activities supported by the UEFA Foundation for Children have strengthened my desire to see European football assume its role in the social development of young people all over the world.”

Back in November 2018, as the UK partner of the Real Madrid Foundation, Kinetic coaches were lucky enough to visit Real Madrid HQ for a 5-day training course. The course was run by the international training department focusing on the coaching methodologies of the Foundation for coaches to implement in their own countries. Projects from USA, UK, Uganda, Bahrain and India were present for a long weekend which included tours, matches and coaching sessions.

Founded in 1997, the Real Madrid Foundation aims to communicate the club’s cultural and sporting values to society. The foundation epitomizes the club’s 113-year history, supporting the communities that have been present throughout its development. The Real Madrid Foundation develops social and training projects based on nine key values: leadership, self-control, humility, team, effort, teamwork, respect, tolerance and solidarity. The Real Madrid Foundation’s social sports schools focus on supporting the education and holistic development of minors living in vulnerable situations around the globe, as well as promoting development cooperation across the five continents in conjunction with leading NGOs and specialist organisations.

Emilio Butragueño, director of Institutional Relations at Real Madrid CF: “We all played football on the street, at least those from my generation. We played with a bag of potatoes, making it more or less into a ball shape with some string. This remains the same: in any town you can play football. The idea was to get closer to these kids (who are the fundamental group of beneficiaries although there are others, such as the ill or recluses) and use football as an educative tool to transmit values.

The footballing world, in general, is generous – as it is generally in the sport’s world. There’s global sensitivity towards those who need it the most. Perhaps it’s because we started earlier, or because we have found the ideal model to show our solidarity, we are particularly useful for the communities where we work. But all the footballing world, each on their own step, stands out for their willingness to help.”