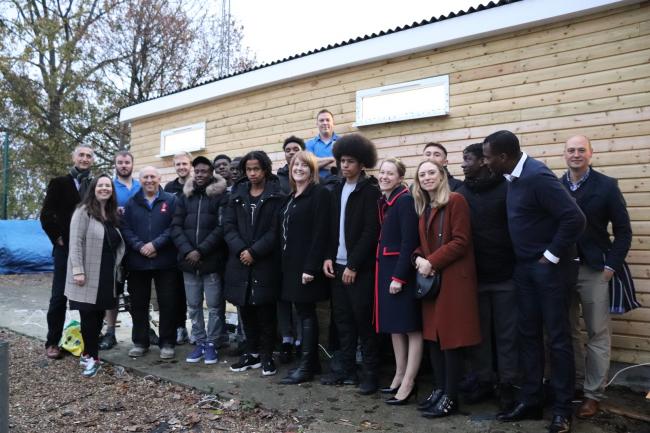 The new building was completed in October thanks to support from the #iwill Fund, a programme set up to increase volunteering and social action opportunities for young people, made up of joint investment from the Big Lottery Fund and the Department for Digital, Culture, Media and Sport.

Over four months, 119 local young people chipped in with the support for 40 ex-tradespeople mentors, who taught them new skills such as carpentry, tiling and plastering.

Fernando Gonzalez, 17, one of the volunteers involved, said: “I am happy I got involved in the project as it’s something that has helped me and also helped the community.

“For anyone thinking about volunteering I would say go and try it. You’ll gain new skills and feel great for doing something that also benefits other people.”

Sarah Jones, MP for Croydon Central, officially opened the new changing rooms at a launch event on Friday 16 November, where she was joined by the young volunteers and mentors involved.

Sport England matched the #iwill Fund’s donation, creating a grant of £125,000, which was awarded to social enterprise, Volunteer It Yourself, to provide volunteering opportunities for young people to refurbish 15 sports venues across England over an 18 month period.

DIY retailer Wickes also supported the project by donating tools and materials, with many of the mentors being staff members and customers of the store.

“We worked in all weather and not one learner complained. They should all be very proud.

“Not only have they earned City & Guilds qualifications for themselves, but they’ve helped build new changing rooms for Croydon FC that will hopefully be used for years to come.”